Every act of translation displaces the original in time and space, putting words in motion. The new landing ground promotes unexpected encounters and frictions with other syntaxes, minds and specificities, out of which fresh meaning may flourish. If books are situated in history, so are their translations. On the 19th of September, 2018, we received the PDF of The Mushroom at the End of the World [USA, 2015] to work on its conversion to Brazilian Portuguese. One month later, in a historical election that fractured the country, Jair Bolsonaro was elected president. Our translation takes place over the course of two years, during which Brazil underwent a violent process of rightification that culminated in 2020, when Bolsonaro’s necropolitics peaked during COVID-19 with his reply “So what?” to a journalist who informed him Brazil had just passed China in the number of deaths.

The translation arrives in Brazil in such a context, bringing in the arts of noticing. As a powerful and extensive research that manifests in-depth thought and precise language, Tsing’s elaborate work fosters imagination and supports intellectual immune systems to social and environmental violent attacks. Its rich narrative teaches us about the complexity of life on the planet, helping us to resist in times when people have become numbers, and even numbers have lost their meaning. Times when entire ecosystems have been simplified to become square kilometers, making us numb about the unprecedented extermination of biodiverse environments to give space to industrial monoculture and cattle.

In this event, translation is approached as cultural and political interventions, a creative attempt to forge new vocabularies and images that are so much needed to grasp this extraordinary crisis, which is also a crisis of representation. Translating is the most attentive way of reading, cracking open each word to capture its seeds (or spores), which are then transplanted into remote land. Inspired by Tsing’s book, that task is here expanded into different directions. It is patchy, extending into photography, film, foreign idioms, cultures and even tastes.

One of these experiments departs from the idea of the translator as fungi (or fungi as translator?). In a forest, mushrooms and plants work in collaboration, depending on each other to survive. If not through this entanglement, forests would not exist, as fungi create an intricate underground web that transports water and nutrients that benefit the trees, which in turn feed their companion species with sugar originated from photosynthesis. Translators also express that relational force. They disturb the apparent stability of the original, as they dig into its roots to transcreate meaning and nutrients across cultures, languages and mediums. In that sense, the act of translation supports the biodiversity of thought and life, saving us from the monoculture of the mind and helping navigate the end of the world, as many different ones may rise like a flush of mushrooms after the rain.

*The event was cancelled due to COVID-19. 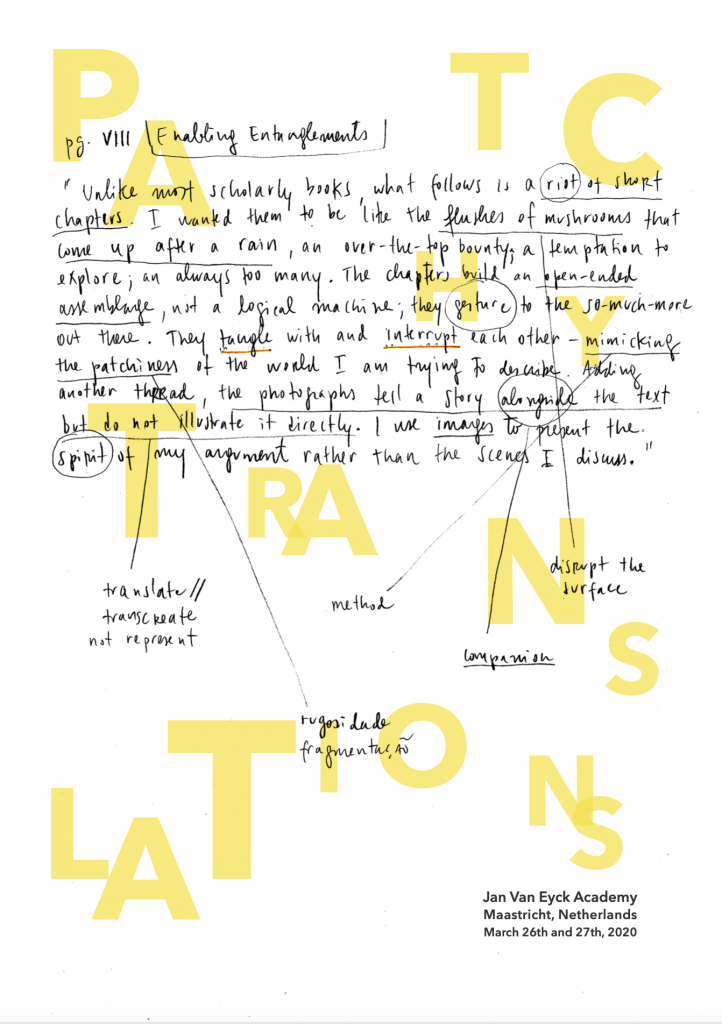